Dos and don’ts in маршрутка

If you have been in Russia (not as an oligarch), you may have taken маршрутка (a little bus):

In English, it is possible to spell this word as marshrootka, marshrutka and even marshroutka (the last one sends you back to the concept of “route”).

– replaces almost all public transport in majority of Russian towns – so, it is important to know how to use it;

– drivers are known as fast, fearless, breaking all possible and impossible traffic rules, men with a sense of humor;

– to catch this bus, you need to wave like mad and sometimes even jump to attract driver’s attention;

– if the drives shows you with his forefinger and middle finger (kind of V but upside down), don’t get him wrong – passing by, he is just asking if you agree to stand as all seats have been occupied (this gesture resembles feet);

– often overcrowded, and during rush hours, you will never get into it if you remain a typical English gentleman – alas, you will see lots of men getting inside before women and children;

– during super rush hours and on student routes, the only way to catch one is to stand in the middle of the road and wave to the driver like your whole life depends on his decision and show letter V upside down;

– made of a super elastic material unknown to the rest of the world (proof: looks like designed for 13-14 people max but can easily take 20-30);

– if you have taken a seat, it does not mean it is yours (British, beware!): somebody can take a sit on your lap;

– to request a stop you need to use a special tool which British people use very reluctantly – their voice (read: you need to shout you want a stop – you would rather miss it than shout, ah?);

– the previous tip explains why the seat right behind the driver can become your unpaid full-time job;

– it is divided into 2 parts: driver’s cabin with 2 extra seats for passengers and main passenger part;

– the former (read above) one is normally for beautiful girls and those who can, during the whole journey, hold the safety belt in such a way that it seemed it is fixed properly (Normally safety belts do not work in these buses. If you don’t know what to do, just put the buckle under your bum, and the road policemen will think (or pretend to think) you are safe);

– marshrootka has rules, peculiarities and sarcastic slogans you can find inside (to understand this humor, please read above):

We fly for you (drivers of marshrootkas)

Don’t run around fast inside 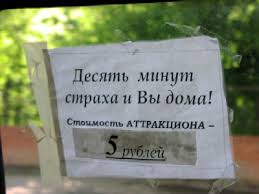 10 minutes of fear and you are home! Cost of amusement ride – 5 rubles

Getting closer and closer to the person next to you, you give hope to people waiting at the bus stop

I'm Eugenia, a professional tutor of Russian. Over years of teaching, I've accumulated many interesting materials for learning Russian which I'd like to share with you. This blog is for those who can read Russian, know basic words and basic grammar but would like to progress further. If you want to arrange a Skype lesson, just message me eugenia@eu-trans.co.uk